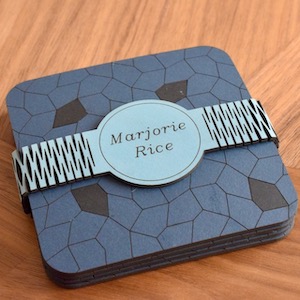 This is the story of a San Diego housewife who, through sheer perseverance and intellectual curiosity, managed to play an essential role in solving a math problem that has intrigued humans for hundreds of years.

The math problems at hand are geometric tilings and more specifically convex pentagonal tilings (tessellations). You might think that pentagons don’t tile but that’s only true for regular pentagons. If you start exploring irregular pentagons you’ll find shapes of pentagons which tile a complete plane, like the tilings below:

The story begins in July 1975 when Marjorie Rice, a mother of five, read about pentagonal tilings in Mathematical Games, a column in Scientific American, which was written by Martin Gardner. She was intrigued by the fact that convex pentagonal shapes can generate such amazing patterns and thought how wonderful it must have been to discover these new types of pentagon tiles.

What Marjorie didn’t know at that time is that, even though Gardner explained that Kirshner had published a paper in 1968 where he argued that all types were found, Richard E. James III, upon reading the column, had discovered a new type.

Gardner shared this discovery in the same column in December 1975 and this inspired Marjorie to start her own search. She methodically analyzed all existing types and created her own way of describing the relations within these pentagon types. What’s most striking about this is that she achieved this without any formal education in mathematics. Her research was fueled by her intellectual curiosity and perseverance.

She didn’t share any of her work with her relatives and friends (she was afraid they might think she was crazy) and hid it whenever anyone entered the kitchen, where she did most of her work. She did share her findings with Gardner, who shared it with expert mathematicians. Although her own notation was like nothing seen by mathematicians, she did demonstrate to Doris Schattschneider in 1976 that she found a new type of pentagonal tiling.

Doris and Marjorie started corresponding which led to the discovery of three more types by 1977 by Marjorie. In total she discovered 4 out of 15 types, playing an essential part in solving this mathematical problem. In 2015 a team of 3 academics found the last type and in 2017 a proof was presented that the list was now complete but it hasn’t been completely peer-reviewed.

When we discovered this inspirational story we felt obliged to create a set of coasters to share with your guests (and because these patterns look amazing!). Each coaster in the set highlights a type of tiling that Marjorie discovered and we hope that these beautiful patterns can remind us that anything is possible as long as we persevere. Because if somebody with no prior education in mathematics was able to contribute soo much to the field, why shouldn’t we at least try to achieve our goals?

If you want to read more about the story of Marjorie Rice, make sure to check out the Wikipedia article about her and about pentagonal tilings.